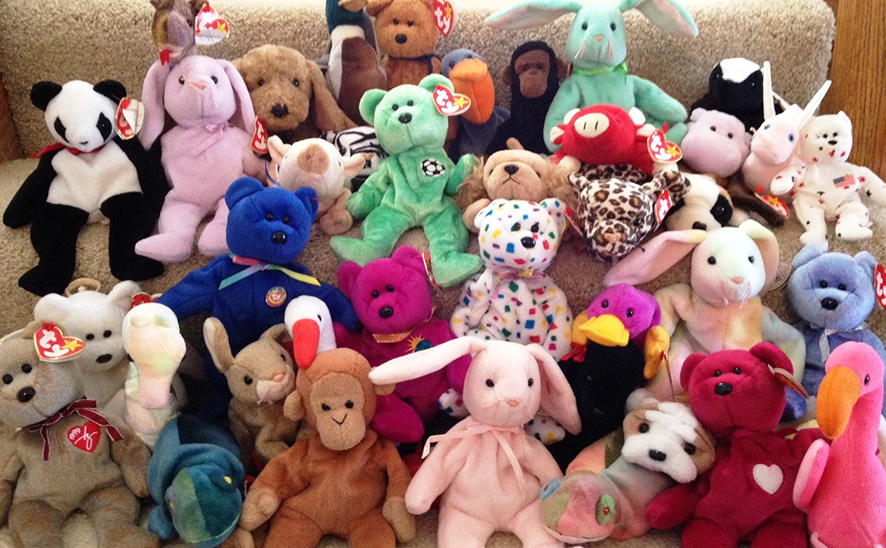 Beanie Babies were different. They were stuffed with beans instead of classic fillers like fiberfill, and their pile was thin. They could be ‘posed’ thanks to metal threads that were in their legs, arms and sometimes pinchers and let’s face it, they were cute. Back in 1993 the nine original Beanie Babies were ‘born’ or launched into the market. They consisted of Pinchers the lobster, Brownie the bear, Patti Platypus, Spot the dog, Chocolate the moose, Squealer the pig, Splash the whale, Flash the dolphin and the very first one, Legs the frog. People thought they were sweet and they sold well, until 1995 rolled around and collecting Beanie Babies became a craze that swept the nation.

The company, Ty Inc. who came up with the Beanie Babies idea in the first place deliberately fed the fires of the craze by making certain designs scarce, limiting quantities of each design available at each store, restricting independent store shipments to severely limited numbers and retiring designs seemingly without rhyme or reason. All of these factors together made collectors more rabid in finding the designs they wanted, and made a huge secondary market for the toys, thus upping the value of them immensely.

In 1996 the company came up with Teenie Beanies that were smaller versions of the toys set to be marketed with McDonald’s Happy Meals. This caused mass hysteria, with trucks being hijacked, restaurants fearing for their employees’ safety and of course those collectors who would call ahead to order hundreds of Happy Meals and then tell the staff to ‘hold the food’. All this because people knew they could re-sell their beanies for hundreds if not thousands of dollars on that secondary market.

Bad business practices stopped the craze of Beanie Babies as fast as it had created it. Soon no one was interested in these toys and people were licking their wounds when the secondary market no longer made them rich. These toys that were going for thousands were now added to the inventory at Dollar Stores across the nation and no one gave them a second thought.

Today we are left with the memories of those crazy years in the mid 1990’s where grown people took drastic and sometimes criminal measures to secure Beanie Babies for themselves. If we still have Beanie Babies in our kids’ collections they are worth just as much as the other stuffies and now they are kept around for their cuteness rather than their earning potential.

Perhaps your custom plush will be the next craze for the nation. Perhaps it will just make people happy. Whatever is in your future, making a custom plush character is a fun process with a great ‘get’ at the end. Enjoy!