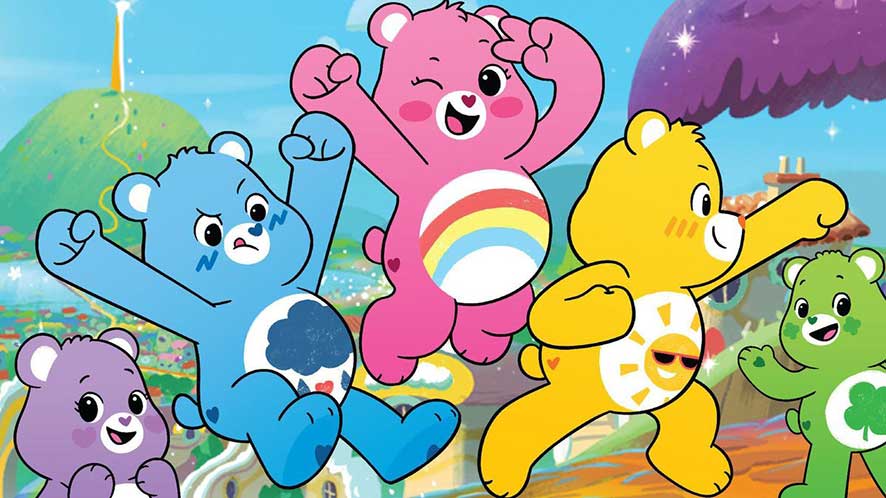 Back in 1981 there were characters created for the American Greetings Corporation for use on birthday and other greeting cards. These characters were colourful teddy bears that had special pictures embroidered onto their tummies to depict their personality. Tenderheart Bear sports a heart on his tummy while Grumpy Bear has a rainy storm cloud on his. There was also Cheer Bear, and Bedtime Bear, Love a-Lot Bear and Funshine Bear, and many others and they were cute, colourful, different and made for great greeting cards.

As it usually goes, these things progress and soon Kenner, the toy company came out with a line of huggable Care Bears in 1983 where they made their debut at the New York City Toy Fair. At the time, the owners had already secured licensing rights with some twenty-six other companies, and because it was already big business spawning books, movies, and other items depicting them, Care Bears was known as the “biggest character launch in the history of retailing”.  In fact, the owners of the Care Bears franchise had garnered a wholesale commitment worth $122.5 million US, with only a $5-6 Million US advertising budget.

All of this from a simple idea and a line of greeting cards. Today everyone knows about the Care Bears, they have been on television, they have movies and books depicting them and they can be found on everything from pillow cases to clothes and from lunch boxes to pencil cases.

Care Bears are cute because they can depict your mood. They are perfect for gifts, whether you have a happy or grumpy friend and they make great baby gifts, too, especially Funshine bear who is yellow with a big happy sun gracing her belly. Care Bears make it okay to have and depict different feelings, and they all got along with each other despite their differences. Each had a duty to fulfil and helped each other along the way, all great lessons for children which is why the movies and television shows were always so popular.

Today after a few re-launches Care Bears aren’t as prevalent as they once were although they are still about in their different forms. It just goes to show you what a great idea can bring. When you design a custom plush for your organization, team or event maybe you will be coming up with the ‘next big thing’ just like American Greetings did all those years ago.

The History of Cotton