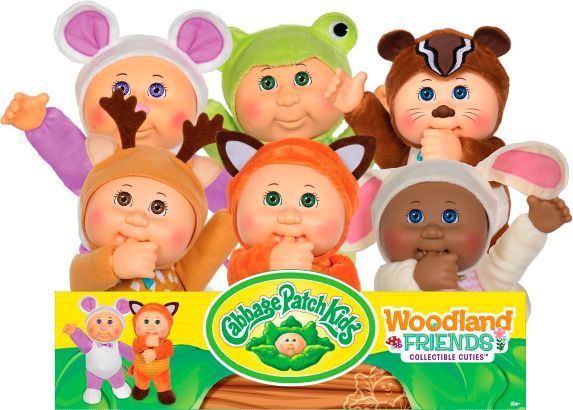 If you were a kid in the 1980’s chances are you had one. If you were a mom or dad in the 1980’s chances are you stood in line for one, or maybe you were in one of the many riots for one. They weren’t particularly nice looking and they were made of a combination of stuffed parts with plastic faces, but they were the ‘it’ toy of the decade. They were called Cabbage Patch Kids and they came dressed in complete outfits, had yarn hair and painted on eyes and even had a birthmark on their backsides, so you knew they were the real deal. Each one came with a name, first and second if you please and an ‘adoption certificate’ that you filled out with your information and sent back to the company in return for the official ‘birth certificate’ of your new ‘baby’.

This Cabbage Patch craze was unlike anything anyone had ever seen before. People would literally line up for days in some cases for the chance to purchase one and fights over specific ones would make the local news all the time. It was a doll, but it was the must have that swept a mania over the country. Stores had a hard time keeping them in stock as when they were expecting a shipment the customers were already in line to buy them right off of the truck. As crazes go, the more people couldn’t purchase the Cabbage Patch Kids, the more they wanted to and demand was certainly outpacing supply.

So where did these dolls come from? Xavier Roberts is the one credited with being the founder and ‘adoption agency head’ for the Cabbage Patch Kids. His is the signature featured on the bottoms of each doll and he is the one who made one heck of a lot of money off of the idea. In fact, he stole the idea from a Kentucky artisan named Martha Nelson Thomas who had been hand crafting the dolls since the early 1970’s. He saw her dolls in a show, bought them and then resold them in his store for a profit. Later he used the same idea and the needle molding technique and sculpting method that he had learned while a student at art school and Cabbage Patch Kids as we knew them in the 1980’s were born.

Over the years Cabbage Patch Kids have lessened in the crazy factor and have also undergone a few changes. Some later versions had brushable hair that was more like a Barbie doll’s in texture rather than the loopy yarn the older versions of the Kids had. Some came with teeth in a smile, some could actually ‘chew’ and of course the hair colours and fashion styles also changed with the times.

Their popularity may have waned today, but they are still available in one form or another in toy stores and of course popular auction sites have them readily available as well. Cabbage Patch Kids were something that made the 1980’s the 1980’s, ranking right up there with leg warmers and shoulder pads. They may have not been the cutest looking thing on the market, but for a time they certainly were the biggest.